With the presidential elections less than a month away and with the rallies of Leni Robredo inviting bigger and bigger crowds, the camp of Ferdinand Marcos Jr. has become quite desperate.

Even a questionable survey from Pulse Asia released last week showed Marcos Jr. losing four points, while Robredo rose by nine points, an indication that momentum has shifted in favor of the vice president.

In a huge slap to the face of former president Gloria Macapagal Arroyo, who has promised Marcos Jr. a landslide win in her home province of Pampanga, Kapampangans AKA cabalens came out in force over the weekend in support of Robredo. 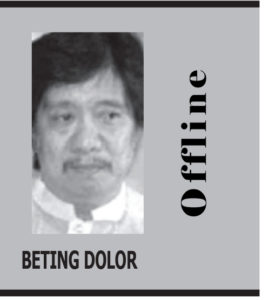 The local police estimated the massive crowd at 220,000, easily the biggest crowd to attend a Robredo-Pangilinan rally. So huge was the gathering that the Marcos Jr.-Duterte camp cancelled their own rally scheduled for the start of this week at the same site.

Going in the opposite direction, Marcos Jr rallies have been gathering progressively smaller and smaller crowds.

This was clear when the Marcos Jr. camp could only claim that 7,000 people showed up at their Samar rally, although drone shots indicate that the number was closer to 2,000.

By comparison, the crowd that attended Robredo’s rally in the same province a few days earlier was pegged at more than 70,000.

In a last ditch effort to stem the Robredo tide, the Marcos camp has been employing the dirtiest tactics imaginable, including blocking Robredo supporters from attending her rallies, sending hecklers to those rallies, preventing Robredo supporters from conducting house-to-house campaigns, and even planning personal attacks not only against the vice president but also her family.

In her Pangasinan rally last week, buses which had been reserved by the Leni brigade were warned not to bring her followers to the site under pain of cancellation of their franchise. The Marcos camp has been doing the same thing but no one has taken any steps to prevent this. The LTFRB has come up with the lamest excuses for their threats, so the bus riders had no choice but to find other means of transportation. Some took jeepneys, some went by boat, others simply walked.

Las Pinas has become notorious for being anti-Leni, at the behest of the richest Filipino Manny Villar, whose son is running for senator under the Marcos Jr.-Duterte banner. Previously, the road leading to a scheduled Leni rally was closed. This week, a planned motorcade was warned that they would be blocked if they dared pass through the streets of the city.

Incidentally, also in Pangasinan, a smaller rally was invaded by hecklers, mostly teenage kanto boys who must have been paid a small sum to shout at Robredo. They were lucky that the VP was present to prevent any retaliation by her followers against the misled boys.

Those brave kids are an indication that the so-called Solid North has crumbled and the Marcos name no longer wields the clout it once had.

Then there is Camarines Sur Rep. LRay Villafuerte who was caught telling one of his people to begin personal attacks against the entire Robredo family.

After he was caught, he ranted and raved that it was not him speaking. It was a deep fake recording, he said, and even offered P7 million for information leading to the arrest of the perpetrators.

Big fat deal. He offered a reward because he knew no one would ever be arrested and charged, since it was he himself who was caught red-handed. He was heard instructing an unknown woman to launch a demolition job against the Robredos and the VP’s allies in the region.

It was noted that the technology to create deep fakes is not available in the Philippines because of the huge costs involved. More importantly, his voice speaking in the vernacular is almost impossible to imitate.

He may or may not know it, but the human voices is unique, much like fingerprints. There may be sound alikes, but any expert can catch the fake very quickly.

The Villafuertes have an axe to grind against Robredo because she had crippled their stranglehold on politics in the region, so expect other dirty tactics to come out of their camp.

For the record, LRay was not on speaking terms with his late father Luis Villafuerte in his later years. It was his dad who accomplished much for the Bicol region.

The worst possible news for Marcos Jr. is the growing RoSa movement, where various political leaders allied with President Rodrigo Duterte have been actively campaigning for a Leni Robredo-Sara Duterte vote, in effect ditching the son and namesake of the late dictator.

Meantime, this being Holy Week, allow me to greet our readers a meaningful week, hopefully leading to a spiritual renewal on Easter Sunday.

A good friend who has been organizing Leni rallies said it is not just the camaraderie in numbers that feels great, but also the energy of the crowd. It’s almost like being slain in spirit, he says.

And in a ridiculous development, the wanted leader Pastor Apollo Quiboloy reportedly wants to declare Marcos Jr. a saint, which leads me to believe that he has either lost his marbles completely, or is evil personified.

Methinks some of the people in the Marcos Jr. camp needs to be exorcised. But I’m sure a few of them are actually nice people, or used to be.

Next week, I’ll detail how the large survey firms have been doctoring the results of their surveys showing Marcos Jr. remains ahead of the race, but is likely to state that the gap is closing. This sets up a scenario wherein the two top presidential bets will be statistically tied by election day. So when Marcos Jr loses, he can again file a complaint before the Commission on Elections, and eventually the Supreme Court.

His “I’m so New York” wife can file the protests for him, yes?